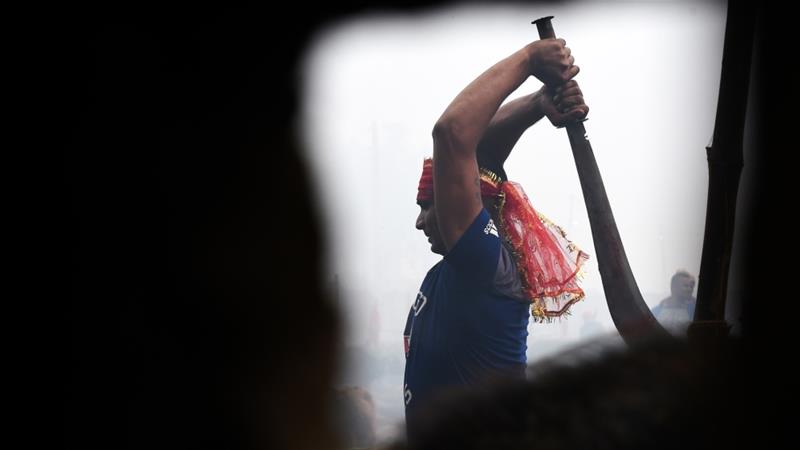 Will Butchering Animals Bring You Closer to God?

Self-hating Americans love to beat up on Christianity and point to other world religions as vastly superior to their own.

But confront these same blind worshipers with the ugly realities of Hinduism as a daily religious practice in many parts of Asia today and they’ll likely give you a blank stare– or accuse you of indulging bigotry and slander.

It isn’t prejudiced, though, to suggest that Hindus may not be living up to their noble spiritual goals by engaging in barbaric animal slaughter — and pretending it’s for a Divine purpose.

The UK-based newspaper The Independent reported this week on the Gadhimai Festival, held every five years in Hindu-dominated Nepal — which features the mass killing of thousands of water buffaloes, including calves still in their infancy.

The U.K. news account included a video that recorded the onset and aftermath of the bloody slaughter as well as eyewitnesses who provided numerous gruesome details:

“The Gadhimai festival started in the early hours of Tuesday morning as a priest killed a goat, rat, chicken, pig, and pigeon and then offered blood from his own body,” the account began.

“Around 200 butchers wielding curved kukri knives then descended on a walled temple arena containing an estimated 3,500 buffalo to behead the animals.

They said others collapsed from exhaustion, sickness, and stress as worshippers attempted to drag them to their deaths.”

Organizers of the festival believe sacrificing the buffalos and other animals bring participants good luck.  It’s specifically intended as an appeal to Gadhimai, the Hindu goddess of power, to answer their wishes.

Despite years of protests, organizers of the event have defended it as part of Hindu religious and Nepalese cultural tradition.

But many educated Hindus who frown on the tradition say it’s giving Hinduism – and countries like Nepal – a huge black eye.

In 2009, some 250,000 to 500,000 buffaloes, goats, pigeons and other animals were killed, mainly by being hacked to death with machetes or having their throats slit with knives.  Some 5 million Hindus from all over South Asia participated in the three-day event

But in 2014, the number of animals killed was reduced to 30,000.  This year’s festival saw far fewer slaughtered – in fact, the lowest ever recorded in the event’s centuries-long history.

Back in 2015, the Nepalese government formally banned the Gadhimai festival, but popular protests from Nepalese Hindus in the region have kept the event alive.

And despite pleas to eliminate ritual sacrifice in the future – and replace it with purely symbolic sacrifice — few expect the bloody slaughter to cease entirely.

Nepal is not alone.  Local Hindu groups in India still practice ritual animal sacrifice, ostensibly for religious purposes, especially in the eastern part of the country.

In the town of Orissa, a festival similar to Gadhimai is held annually to try to appease a local goddess known as Samaleswari.  In this case, primarily male goats are sacrificed.

Groups in other countries with Hindu-observing populations, including Muslim-dominated Indonesia (primarily on the island of Bali), also practice ritual animal sacrifice, though on a lesser scale.

One of the hardest part of these events for outsides especially to understand – and tolerate is the way baby buffaloes and other animals are made to bear witness to the slaughter of their mothers – and then just as often slaughtered themselves.

Their terrified shrieks and wailing fill the air as the merciless onslaught continues, often for well over an hour.

But nothing seems to deter those that butcher them.  They often emerge covered from head to toe with animal blood, as battered and headless corpses lie strewn around them.

And to what good use are these tons of raw buffalo meat put?  None, of course.  So many Hindus are practicing vegetarians

This is “Namaste” from hell.

26 thoughts on “Will Butchering Animals Bring You Closer to God?”