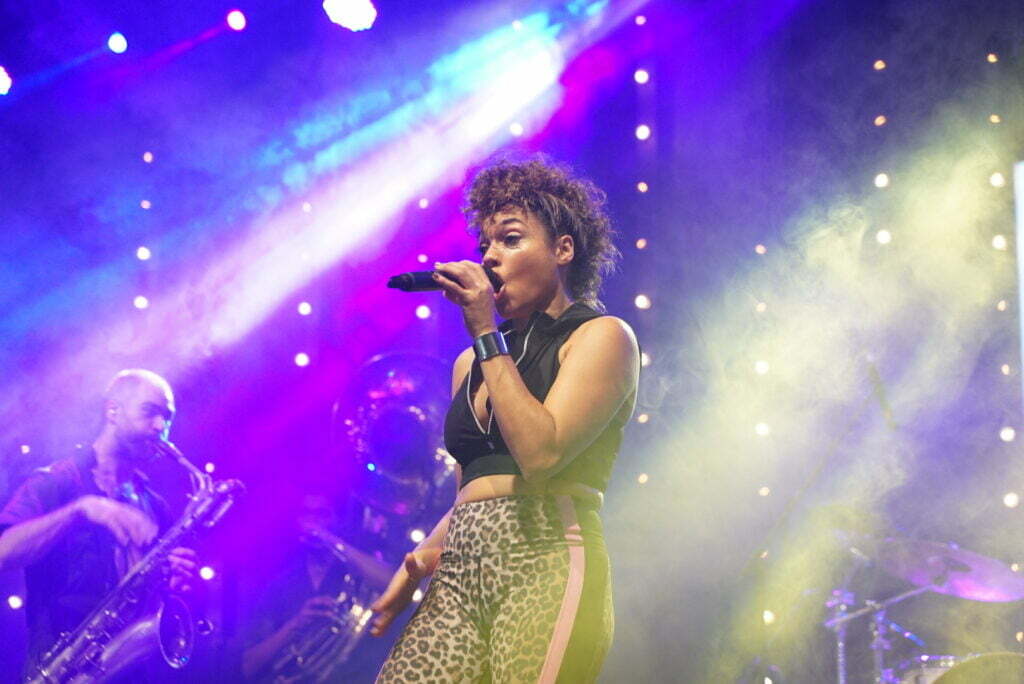 There is an old saying that goes, “better to be pissed off than pissed on.” Guess a fan at a Florida rock concert never heard it! He seemed to enjoy the “golden shower” he got ON STAGE at a recent “Brass Against” concert.

Sophia Urista, a rising rock star, has been described as “disgusting” after she urinated on a male fan during a concert in Daytona, Florida, recently.

Urista, the frontwoman for New York-based cover band Brass Against, was partway through a performance at the Welcome to Rockville festival when she told the crowd she needed to relieve herself.

“I gotta pee, and I can’t make it to the bathroom,” Urista told the crowd in the now-viral footage. “So we might as well make a show out of it.”

The repulsive rocker, 36, then brought a male fan onto the stage and instructed him to lie down before popping a squat on his face as she performed a rendition of Rage Against the Machine’s “Wake Up.”

“Get my man with the can on his head ready, ’cause we’re going to bring him on stage, and I’ma p–s in this motherf–ker’s mouth,” Urista allegedly said before the disturbing incident.

Besides being manifestly gross and unsanitary, it turns out that the shock-rocker may have actually broken a “golden rule” against public urination since a police report was filed, so said the The Daytona Beach News-Journal.

Daytona Beach Police spokesman Messod Bendayan said authorities received a complaint on the department’s Facebook account about the urinary infraction — and instructed the inflamed informant to file a report.

“I did get one like that, and I told her to file a report, and she did,” Bendayan said, noting that the criminal investigations division is still probing the incident.

The local outlet also said indecent exposure is punishable by up to a year in jail or a $1,000 fine since it’s illegal to “expose his or her sexual organs in public or on the private premises of another, or so near thereto as to be seen from such private premises, in a vulgar or indecent manner.”

Footage of the incident was, shall we say, “leaked” on social media, resulting in Urista being described as “pure trash” by one irate music lover.

Brass Against, which has been touted by the rock band Tool and will open for the Maynard James Keenan-led act on its upcoming international tour, took to Twitter to apologize for Urista’s shocking act, “We had a great time last night at Welcome to Rockville. Sophia got carried away. That’s not something the rest of us expected, and it’s not something you’ll see again at our shows. Thanks for bringing it last night, Daytona.”

Meanwhile, Urista was roundly condemned on social media, with one woman writing: “That would count as indecent exposure and a criminal offense surely?”

Dozens of others expressed their disdain, describing the act as “madness” and “wrong.” “This is devilish. Truly the world is coming to an end,” a Twitter user blasted.

At least one curious user wondered who cleaned up the mess, to which the band replied, “Sophia actually cleaned it up after we left the stage.”

Others appeared baffled by the male fan who was whizzed on, with footage showing that he seemingly enjoyed himself at the behest of the band, which has 455,000 fans on Facebook.

For any of you who wish to see what Urista does next (dare we imagine if she has Taco Bell before the next show?), she is set to play at Brooklyn’s Saint Vitus on Nov. 22, and Brass Against is scheduled to open for Tool on their 2022 European tour dates.