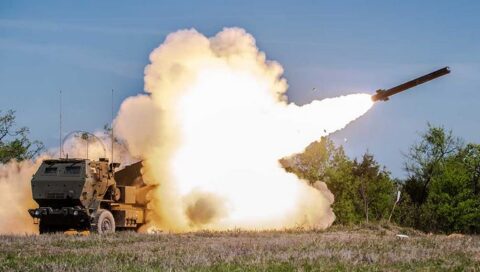 As part of Exercise Noble Fury, Sailors and Marines with the 3rd Marine Division practiced island assault techniques that could be used in a potential battle in the Pacific. During the exercise, Marines flew on Marine V-22 Ospreys and onto Ie Shima, a small island just west of Okinawa.

With airborne help from AH-1Z attack helicopters, over 100 Marines practiced taking an enemy airfield and secured the island. After repelling a simulated enemy counterattack, the Marines conducted a rapid nighttime HIMARS infiltration.

“Upon landing, Marines swiftly positioned the HIMARS launcher to simulate a long-range, precision firing mission with targeting information received and coordinated while aboard the aircraft in flight. Minutes later, the HIMARS was back aboard the aircraft to exfiltrate and move to its next firing point at a different location.”

After the successful HIMARS exfiltration, CH-53E Super Stallions picked up the Marines and left the island.

Though in this case, the USMC utilized the HIMARS mobile artillery system, it is possible that in an actual near-peer fight in the Pacific a different missile system could be used. One option that could prove of high value is the Corps’ new Naval Strike Missile (NSM). Though primarily in use with the U.S. Navy as an anti-ship munition, the Marines have a plan for using it on land.

Modifications to the joint Army-Marine Corps Joint Light Tactical Vehicle (JLTV) would see a pair of NSM missiles mated to the truck’s frame. These modified JLTVs—without a cab area and remotely driven — would have the ability to rapidly off-load from the air, fire at a sea-based target, and scoot back onboard. Alternatively, they could be dropped off for longer periods of time and, by taking advantage of the JLTV’s off-road capabilities, and remain hidden on remote Pacific islands for longer periods of time.