As stay-at-home orders due to the ongoing pandemic have forced many of us to learn to love solitude and become reacquainted with our homes, one couple’s life has remained virtually unchanged.

Ten miles north of Tofino, British Columbia, off the west coast of Vancouver Island, Catherine King, and Wayne Adams live on a sustainable, floating compound. It’s called “Freedom Cove,” a labor of love, hand-built using recycled and salvaged materials. It’s been their home for the past 29 years.

Freedom Cove is a 25-minute boat ride away from the closest town, and don’t even think about hopping in a car. “The only option to get here is by water,” Adams says. “There are no road accesses. The water is our highway.”

The whole structure is the size of two city lots and weighs 1 million pounds, floating freely on the ocean.

Welcome to Freedom Cove, a sustainable island fortress floating off the coast of Vancouver Island.

While there are lines that tether the compound back to the shore, it is not anchored to the ocean floor.

When you arrive, you’re immediately greeted by bright magenta buildings with dark turquoise trim. An archway of whale bones welcomes you in.

The compound has everything you could possibly think of and more: a dance floor, an art gallery, a candle factory, four greenhouses, six solar panels, and access to a small waterfall that provides constant running water.

It has its own waste management system

The couple has even figured out their own waste management system.

They installed a floating tank to, in Adams’ words, “deal with the affluence.”

If they wanted to, King and Adams could completely self-sustain on Freedom Cove without ever needing to go into the city.

It was inspired by nature

As artists, King and Adams always drew inspiration from nature. 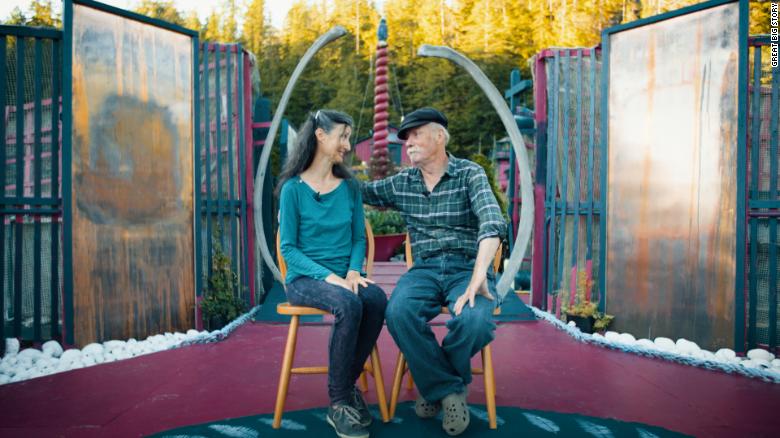 Adams is a carver, using found elements in nature – like feathers and bones – to create his works.

King is an artist, dancer, and a natural healer, having studied homeopathy.

But why live off the grid?

“I wanted to be a successful, wealthy artist, live in Tofino and have a studio in the wilderness, like all good rich artists should,” Adams says.

“I was hoping to make a lot more money as an artist. We could never buy real estate, so we had to make our own.”

A call from nature pushed them to make their dreams a reality.

It was the result of an accident

After staying in a friend’s cabin in Cypress Bay, a large storm blew wood onto the property.

King and Adams gathered the wood and used it to build the bones of what would become their future home.

“I guess we were being given a sign that this is the time to begin,” Adams recalls.

As they continued to further grow their home, the couple followed with their precedent of only using recycled and salvaged materials. 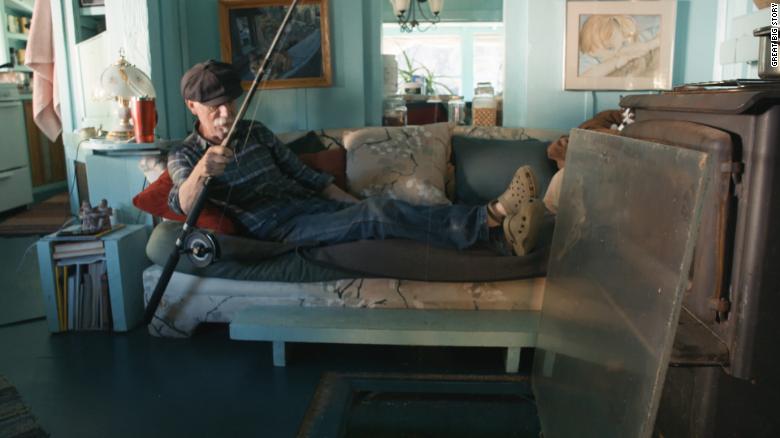 Thanks to a piece of Plexiglass in their living room, Adams is able to fish from the comfort of his couch.

Many parts were gathered from loggers and fishermen in town. Adams would trade them art for whatever they had in their backyard, whether that was old fish farms or floats.

A piece of Plexiglass scrounged up from the Victoria Hockey Rink forms a clear glass floor in their living room, which Adams can lift up to fish from the comfort of his couch.

It began as a sort of ‘downsizing’

Prior to Freedom Cove, the couple lived in an apartment in Tofino. They call their move into nature a “deceleration process.”

“We had all kinds of things like food processors and items that would require a lot of electricity,” King remembers.

“We gave them away to people and unloaded a lot of things in preparation.”

They had no choice. The first iteration of their floating home had no running water and no power.

Today, their day-to-day is quite a bit different to what it was in Tofino.

“Living out here, you can’t just get instant anything,” King says. “We can’t just order a pizza … we can’t just go to the corner store … You have to do the work to get what you want, if you want it.”

Doing that work is an ongoing process of learning, changing and growing.

King starts her day by sweeping and shaking out the carpets.

“In the wilderness, there’s always a lot of dirt and dust,” she says. 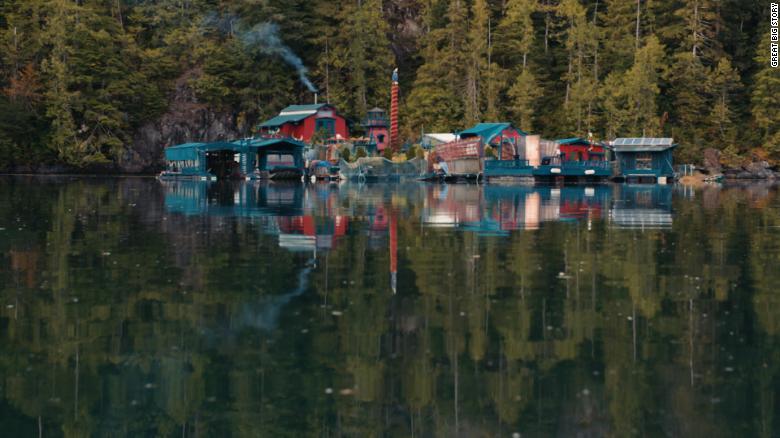 She then waters her thousands of plants and vegetable gardens – all germinated from seeds – and rows out in her canoe to gather seaweed for compost.

Adams begins by gathering firewood and starting a fire to make sure the house is heated.

They both work on building new components for their home.

“It is a project,” King says. “It is a project in growing food to provide for the family. It is an art project … It is a project to have a space to move, to dance, to play music, to do things spontaneously that you couldn’t just do in the same way if you were in the city.”

Their neighbors are … unusual

And while they may not have any human neighbors for miles, the couple still has plenty of company.

“We have some resident crows here who are part of the family,” Adams says. “We know all the birds here.”

“We have named Harry the heron, Sylvie the seal,” King adds. “Gertrude and Heathcliff the seagulls.”

“I had lived in the big city, I knew what that was like,” King says. “I really needed the peace of the wilderness.”

“Going into a city is just shocking in the sound department,” King says. “I get kind of jangled up inside … the noise starts to get to me, I find it’s easy for me to lose my center.”

“We have carved a piece of the world out for ourselves here,” King says. “We can live uniquely, differently than anyone else on the planet.”

But, how about seasickness?