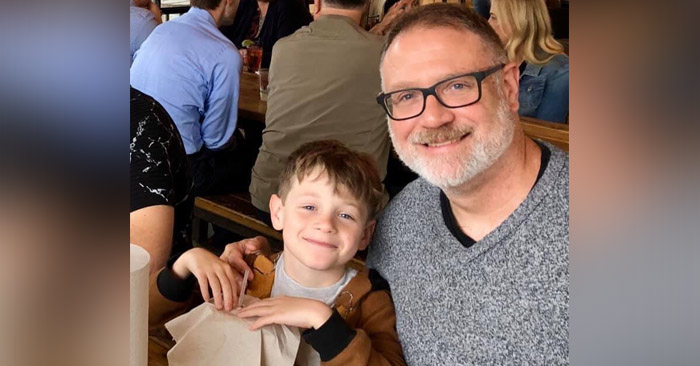 The mind-numbing decision by a jury preventing the boy’s father Jeffrey Younger from blocking the child’s mother, his ex-wife, Dr. Anne Georgulas from moving forward and administering the biological male puberty blockers and cross-ex hormones in order to chemically castrate their son.

Younger’s ex-wife insists that young James is a girl because the boy likes the Walt Disney movie, “Frozen.”

The lopsided verdict of 11 to 1 not to grant Jeffrey Younger Sole Managing Conservatorship over his two twin boys, speaks volumes regarding the kind of individuals selected as jurists within the Lone Star State that would allow this form of brutality on a child, is usually experienced within third-world countries.

Judge Kim Cooks will read her ruling on possession, child support, along with Dr. Georgulas’ other requests at 1:30 p.m. CST on Wednesday.

Jeffrey Younger along with his ex-wife Dr. Georgulas were in court last week fighting over custody of young James. Younger argues his ex-wife is “transitioning” James to be a girl against the boy’s will.

Dr. Georgulas, who brought the lawsuit, against her ex-husband, is demanding that overnight stays regarding his twin boys be decreased, along with mandating his visits with the boys to be supervised.

Even more egregious than being denied unrestricted visitation rights, this poor dad may be forced by the court from addressing his son by his given legal birth name “James” and that he be prohibited from bringing James around people who do not “affirm” James as a “girl.”

This isn’t about a confused 7-year old child, thinking perhaps he might like being a girl and having a fondness for the movie “Frozen.” This is actually about a vindictive woman, plotting for whatever reason the destruction of her ex-husband with the help of the judicial system, using an innocent child as an excuse to perhaps “get even” for some perceived wrong.

Dr. Georgulas is a reprehensible human-being, for using her child as a pawn and should be cited for willful child-abuse, along with losing her medical license.

On Tuesday, #ProtectJamesYounger started trending on Twitter. As HotAir’s Jazz Shaw pointed out, this court case will most likely require intervention by a higher court to be stopped, but the larger point this was ever allowed should indicate that society has seriously “fallen down the rabbit hole.”

“We don’t let children under the age of 18 get a frigging tattoo. If a school nurse gives a seven-year-old an aspirin without a parental consent form they can be fired. But THIS IS OKAY????”

After this case became public Social Media was ablaze.

“I have been saying literally for five years that Republicans need to make opposition to radical left-wing gender theory a top campaign issue. It’s important and every sane human in the world would stand behind them on it.”

Concerned Americans sent thousands of tweets with the hashtag #SaveJamesYounger.

“This is a very scary case! So a 7-year-old boy will now be transitioned into a girl. How far will this suicidal madness go in western society? #ProtectJamesYounger”

“It absolutely disgusts me that a liberal judge ruled that a father can’t prevent his 7-year-old son from ‘transitioning genders.”

“What a crazy world we are living in.”

Jeffrey Younger also took to social media, making his case that his young son James clearly does not think he is a female:

“I’m looking out for the best interests of James, my son. When James is with me, he shows no signs of wanting to be a girl when given the choice. Even when in female company, away from me, James rejects a female gender expression.”

“James is unaware of the long-term consequences of transitioning gender. James has expressed an interest in having children. If subjected to medical interventions, James will be permanently sterilized. James would never be able to have children.”

“Help me Save James.”