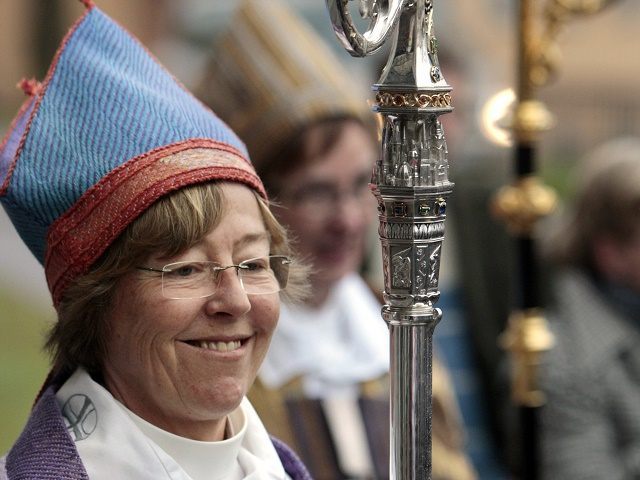 Sweden is famous not only for fjords but for its feminist government. Now, Eve Brunne, the first lesbian bishop in the Church of Sweden, has provoked strong criticism for stating that she has more in common with anti-Christian Muslims than right-wing Christians.

During a Sveriges Radio show called People and Faith, broadcast on May 30, 2019, Bishop Brunne accused Rightist populists with commandeering the subject of Christian values and said:

“We all have to think about which people we are and who we are living with…Although we do not speak the same language or pray to God in the same way or look the same, we have the same value and we shall live in a country together and have the same rights. I say that I sometimes have more in common with Muslims, those I meet, than with the right-wing Christians.”

The clergywoman compared militant Christians of the Middle Ages to modern-day Muslims who still cling to past atrocities:

“We hear a lot about terrorism and think that it is Muslims who practice this, which it is, but it is nevertheless a small, small minority of all the Muslims we know.”

In 2015, Brunne proposed that a dockside Seamen’s mission church in her diocese take down all signs of the iconic Christian cross and place markings showing the direction to Mecca for the benefit of Muslim worshippers – in church. The religious leader defended her belief, blogging that “removing Christian symbols from the church and preparing the building for Muslim prayer doesn’t make a priest any less a defender of the faith. Rather, to do any less would make one ‘stingy towards people of other faiths.'”

In a meeting at the Stockholm dockyards this year, the bishop challenged a priest to explain what he would do if a ship’s crew came into port who weren’t Christian but wanted to pray. She called Muslim guests to the church “angels.”

Brunne argued further that all airports and hospitals have multi-faith prayer rooms so converting the portside church was no big deal. Accusing the bishop of using words that were “theologically unthinking,” Father Patrik Pettersson, a priest in her diocese who is active in the same parish as the Seaman’s mission church, disagreed in a blog of his own, saying that a consecrated church did not compare to a prayer room and “I should have thought a bishop would be able to tell the difference.”

Pettersson had more to say about the reasoning Bishop Brunne had advanced to support her novel ideas about the relationship between Christians and Islamists:

“Ignoring the rhetorical murmuring, the only argument bishop Eva really put forward in support of her view is ‘hospitality’…How do you respond to that? Not much of a basis for discussion, as one colleague put it. The theological, ecclesiological, pastoral and working issues are left untouched.”

The bishop has no authority over the independent mission church which functions outside the diocese. Kiki Wetterberg indicated that her church would be welcoming but not accommodating to other religions’ iconography:

“I have no problem with Muslim or Hindu sailors coming here and praying. But I believe that we are a Christian church, so we keep the symbols. If I visit a mosque I do not ask them to take down their symbols. It’s my choice to go in there.”

As Muslims grow in numbers in Sweden, they are pushing their cultural weight around. In 2018, Muslims in the city of Växjö lobbied the local government to allow the public broadcast of the Islamic call to prayer.

Bishop Fredrik Modeus echoed Brunne’s pro-Muslim sentiments when he announced his support for the Växjö Muslims, saying he looked forward to hearing both church bells and prayer announcements in his city.

The Church of Sweden is promoting the United Nation’s objective of populating the world with Muslim “refugees,” many of whom are men of military age whose religion preaches death to the infidel – those who don’t follow Islam and acknowledge Mohammed as the One True Prophet of God (Allah).

In January 2019, Malmö parish vicar Anders Ekhem announced that the city’s St Petri Church would hold a religious service in solidarity with the Muslim community and those from other religions during an anti-Islamic public protest:

“During the demonstration, the Swedish Church is going to hold a service where we express joy for our city and our Muslim friends. There is strong support for diverse cultures in Malmö and it is important that the church is there to support that.”

That was on a Friday. The following Monday, the Church received death threats from unhappy Christians. The protest was organized by a group called Pegida whose marches oppose Islam and “criminal asylum seekers” in Sweden. One member posted on the association’s Facebook page:

“We have a crusade – de-Islamize Sweden and by wearing crosses in public we can show that we are many.”

Malmö is the main point of entry into the Nordic countries for thousands of African and Eastern migrants and a key route for smuggling drugs, weapons, and people. Police Chief Superintendent Torsten Elofsson described how the region has changed since 2015:

“We have a number of no-go-zones in Sweden and they are expanding…police can go to these places but you have to take precautions. Years ago, you could go with two officers, no problem. Now you have to send four officers and two cars. If the fire brigade wants to go, they have to take a police escort. They [migrants] throw stones and try to stop the fireman from putting out fires.”

One has to wonder if Bishop Brunne is simply kind-hearted or does she have a hidden agenda shared by some of her religious colleagues and the liberal Swedish government: destroy Christianity in Sweden and replace it with Islam?