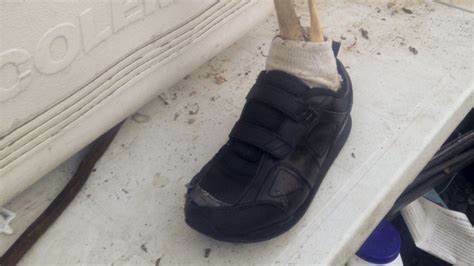 Severed feet with trainers on have been washing up on the shores of the US and Canada for over a decade. Listen to the bizarre story below:

Since August 2007, more than a dozen feet have appeared suddenly, with many still wearing their socks and shoes.

According to reports, the feet started showing up on the coast of British Columbia and neighbouring US state of Washington.

The first was a right foot still in its trainer, which washed up on Jedediah Island in the Strait of Georgia.

Over the years, more and more have resurfaced, with the police and local authorities left scratching their heads as to where they were coming from.

So far, all but one of the cases has been solved, with the prevailing theory that the feet became detached from the bodies as they decayed in the water.

But rather than sinking to the sea bed, the feet, still encased in the shoes, floated to the surface and ended up on the beaches.

And while some have claimed they could be the result of some sinister goings on, the authorities don’t believe this is the case.

The last foot was discovered in a blue sock and light grey Nike running shoe in 2018, with an investigation completed the following year after police matched the shoe with a missing person’s report from that same year.

Laura Yazedjian, a coroner with the service who specializes in identifying remains, told CBC News: “It’s incredibly satisfying, partly to solve the puzzle because it really is a mystery.

“Also just to know that we’re able to give a family and relatives an answer that they’ve been waiting for months or years or even decades sometimes.”

However, one case remains unsolved to this day, they were two feet found in a pair of blue New Balance shoes back in 2016.

All that is known is that they belong to a man.

It’s thought that perhaps the person was not reported as having gone missing in British Columbia, which has hampered any investigation.

With the bizarre findings getting increasing amounts of media attention of the years, investigators have received a number of hoax reports, including one that saw animal bones stuffed into a shoe and set adrift.

It has also heightened people’s attention to the cases, with local residents having second thoughts about any randomly discarded trainers they find on the beach.

Yazedjian added: “I’m pretty sure there’s no unchecked shoe on the beaches of B.C. now.”