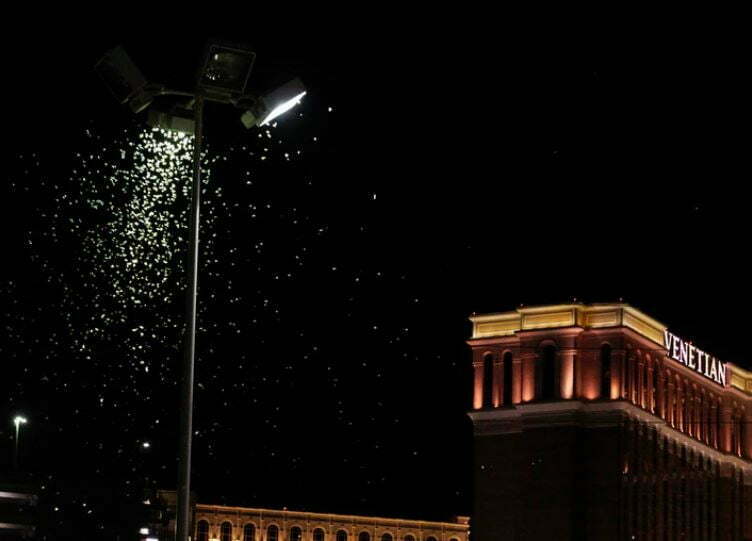 In the summer of 2019, an immense swarm of tens of millions of grasshoppers descended on Las Vegas’s tourist strip. It was so intense some people said it was a plague of near-biblical proportions.

During the swarm’s peak on July 27, approximately 45.8 million insects — which weigh 30.2 metric tons — were flying over the city.

The massive swarm left resident perplexed. But according to a new study published this week in the journal Biology Letters, scientists have discovered one overwhelming reason for the swarm.

Scientists believe the insects were drawn to a spotlight beaming from the top of the iconic, pyramid-shaped Luxor hotel on the Las Vegas Strip.

Other studies have proved that local light sources can attract populations of bugs when they are less than one kilometer away. But this is the first study to look at an extremely bright source of light — known as “skyglow” — that attracts insects from distances farther away.

This is one of the firs studies to grasp how human-produced (anthropogenic) lights can dramatically change the behavior of big populations of insects. “We document for the first time that anthropogenic light acts as a macroscale attractive sink for nocturnal insects,” the researchers said.

How did they do it?

The researchers used radar technology — typically used in weather surveillance — to track the flying patterns of the grasshoppers from vegetated areas during the day to well-lit areas at night.

Using this technology, researchers created images of the total mass of grasshoppers around Las Vegas according to time of day.

The researchers found that the grasshoppers were most likely to migrate at night, “when artificial light may constitute a nocturnal attractive cue.”

So, the grasshoppers were attracted to the big city lights at night. But during the daytime — when there are fewer UV lights — grasshoppers were driven back to vegetated areas on the ground farther away from the city.

Grasshoppers flew into the sky shortly after sunset. They reached peak mass over Las Vegas at midnight.