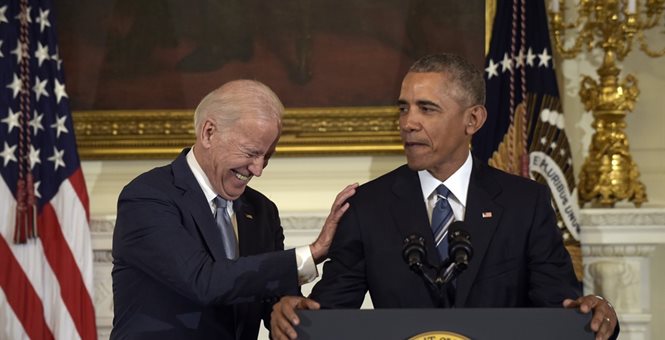 Obama: “Joe Doesn’t Have It”

It was perhaps the most stunning rebuke within contemporary presidential politics, of a former vice president being vilified by his own former running mate.

According to POLITICO, former President Barack Obama warned insiders during a series of private conversations how he felt about his former vice president getting into the 2020 Presidential campaign, regarding in particular Biden’s competence.

In one revealing conversation Obama lamented that his former VP didn’t have the ability to win the nomination stating “you know who really doesn’t have it?

The 44th President of the United States went on to remind those within the meeting that during his 2008 campaign, he had an intimate bond with the electorate, especially in Iowa, that he no longer has, according to POLITICO.

Moreover, considering Biden’s poor performance on the campaign trail, which at times seems to border on someone in the beginning stages of dementia, Obama’s condemnation of his loyal sidekick is brutally honest.

In that those once humorous gaffes no longer seems funny, as Biden struggles to remember where he is, and what years he was vice president.

Obama had even suggested to his former VP, before he announced his candidacy, he didn’t need to enter the race, perhaps attempting to encourage him to sit this one out.

The former president has been holding a series of private meetings with Democratic 2020 hopefuls. The report details that Obama is more involved in the primary race than publicly indicated.

His advice is quite pragmatic and revealing, telling 2020 hopefuls if they don’t think they can win or they don’t honestly think they’re the best person to be president, they should reconsider staying in the race. Adding that a presidential campaign doesn’t only affect the candidate, but also their family, moreover they should be honest with themselves and ask themselves, ‘Can you win?’

Recent polls indicate that despite Obama being publicly out of the limelight he’s still the most popular Democrat in America today, his endorsement despite the party radically moving to the left, would be a major plus for any candidate.

However thus far, Obama has asserted that he won’t intervene in the primary race to help or hurt a candidate unless he feels there was some heinous attack.

‘I can’t even imagine with this field how bad it would have to be for him to say something,’ an adviser close to Obama said.

The one exception however is Socialist Bernie Sanders; the advisor indicated that Obama would definitely intervene, if he felt Sanders would get the nomination.

In fact when both Biden and Sanders were around 25% in the polls, Obama indicated in private that he would publicly speak out against Sanders, hoping to stop his surge.

As for “sleepy Joe Biden” former deputy chief of staff for President George W. Bush, Karl Rove summed up on Fox News, how the Obama team views the former VP.

One would imagine after Obama’s stunning public revelation that Biden must feel a sense of betrayal, however regardless of Obama’s support or not. Biden’s chances of capturing the Democratic nomination, despite his current lead in the polls, is beginning to wane, and will most likely continue to diminish, thanks in part to the Ukraine scandal, and what is likely to come.