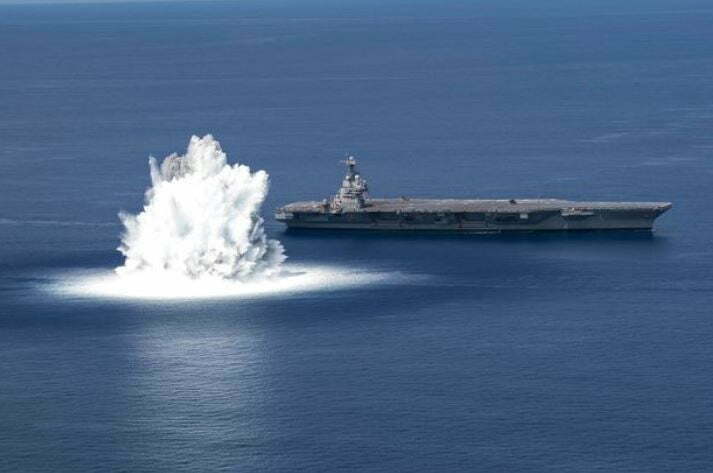 The US Navy has released a shocking video that shows the moment a 40,000 lb bomb exploded in the middle of the ocean that triggered an earthquake 100 miles away.

The footage shows the enormous bomb exploding in “full ship shock trials” in which the Navy is testing the effects such a powerful device has on their ships.

The explosion caused a 3.9 magnitude earthquake about 100 miles away in Daytona Beach, Florida. This is not unusual during similar trials.

The explosion was carried out underwater while a Navy ship sat above water. The trials will show how durable the ship is to bombs and how effective they will be in battle.

The video was recorded from the wing of a US Navy aircraft carrier. It has already been viewed almost 30,000 times on Twitter after being shared by @warship_78.

The explosion attracted unwanted attention, even though the Navy claims it was completely safe. The bomb was detonated to the side of the aircraft carrier to imitate possible battle conditions.

Before these tests, the most recent shock trial occurred in 2016, again off the coast of Florida.

The US Navy said in a statement, “Ford’s shock trials are being conducted off the East Coast of the United States, within a narrow schedule that complies with environmental mitigation requirements, respecting known migration patterns of marine life in the test area.”