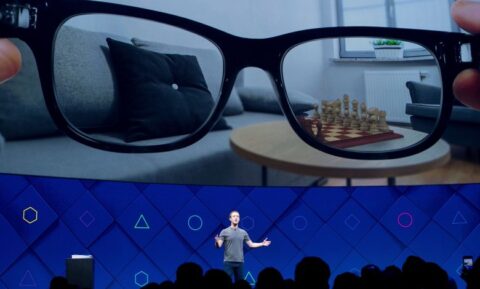 Facebook unveiled its new Ray-Ban smart sunglasses that can take photos and videos of the wearer’s surroundings and send them to a smartphone on Thursday.

Buzzfeed’s Katie Notopoulos took the glasses for a test drive, and while doing so, said she taped over the LED light on the front of the glasses designed to alert bystanders that the device is recording.

When she told Alex Himel, the vice president of AR at Facebook Reality Labs, about this, he said that was a violation of its terms of service. The LED light was added to the new device after Facebook consulted privacy groups, at least one of which is funded by Facebook, as The New York Times’ Ryan Mac noted.

As Notopoulos noted, this isn’t a brand new issue in the world of camera glasses. Many of these types of glasses are already equipped with hidden cameras on the market, like ones listed on Amazon for around $50.

But her experience calls into question exactly how Facebook plans to monitor if wearers honor the terms of service and refrain from covering up the light to hide when they’re recording. Facebook did not immediately respond to Insider’s request for comment on how the company plans to enforce the rule.

Smartphones, iPads, and many other devices don’t come with signals that tell people they’re recording, and these products are ubiquitous. But they’re also less discreet than a pair of glasses, which look like a normal pair of Ray-Bans, that can secretly snap footage of you and instantly send to the wearer’s iPhone.

Facebook has faced pushback over how it protects – or fails to protect – user privacy from its bevy of apps and services. That criticism has especially mounted since 2016 when its involvement with the data firm Cambridge Analytica forever changed how the public perceives the tech giant.

The UK company was able to harvest the data of more than 87 million Facebook users for political ad targeting, and critics lambasted the social media company for not keeping its users’ information secure.

How the company handles any new device rollout’s potential effect on people’s privacy will likely always be in the spotlight.