Some 56,000 to 57,000 years ago, “shortly” before early homo sapiens developed a capacity for language and began migrating out of Africa, a sandy den in pre-historic Canada most likely collapsed onto a wolf pup that was about six or seven weeks old, preserving her in time as permafrost formed and the rest of the world evolved around her.

The nearby Yukon and Klondike rivers nurtured not just the changing wildlife, but settlements and nations, including the Hän-speaking people of the Tr’ondëk Hwëch’in First Nation. The Klondike River also fed the Klondike Gold Rush in 1896 into 1899, an area in the Yukon Territory of Canada that would become Dawson City at the center.

Fast-forward to the summer of July 2016. Gold miner Neil Loveless was water blasting a wall of frozen mud outside of Dawson City when he hit a layer of thawing permafrost — and something else.

Loveless told CBC North that he originally thought perhaps his discovery was a puppy that had fallen down the mine shaft. Still, he picked up the specimen, set her in a gold pan and later a freezer until a paleontologist arrived. 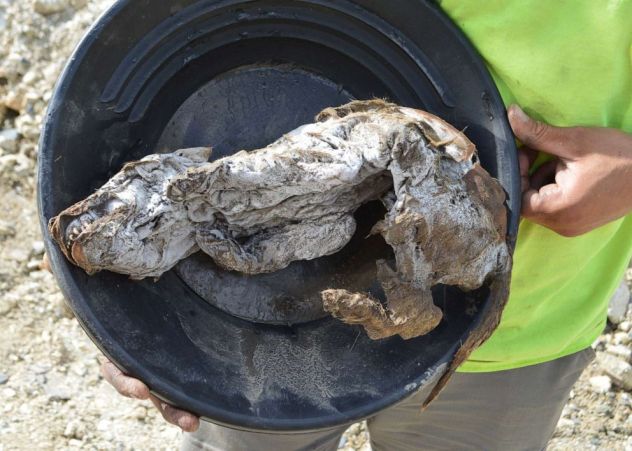 Neil Loveless holds a preserved wolf pup in a gold pan. While it wasn’t what he had been mining for, the discovery was gold for paleontologists. (Government of Yukon)

The permafrost had yielded not gold, per se, but perhaps something much more valuable, a study published on Monday in the journal Current Biology detailed.

The perfectly preserved Pleistocene gray wolf puppy, named Zhùr by the Tr’ondëk Hwëch’in after the Hän word for “wolf,” was the most complete wolf mummy ever found.

“She’s just so complete. She’s so amazing. She’s so intact,” Julie Meachen, a vertebrate paleontologist from Des Moines University and lead author of the study, told CBC North. “I mean, she even has her fur, everything is there.”

While it isn’t unheard of to find animals preserved in permafrost, Zhùr is unique. Everything from her fur to her organs has remained intact, save for her eyes.

“Mummified bodies with preserved hair, skin and flesh like this are incredibly rare from North America,” said Grant Zazula, a paleontologist with the Yukon territorial government. Together, he and Meachen put together a team of Canadian and U.S. scientists to study the mummified puppy.

From all that was available, scientists were even able to estimate her age at death — about six to seven weeks old — based on radiographs of her skeleton that revealed unfused bones. Tests from radiocarbon dating to examining the animal’s molecular age through her mitochondrial genomes narrowed the time of Zhùr’s life and death to 56,000 to 57,000 years ago. 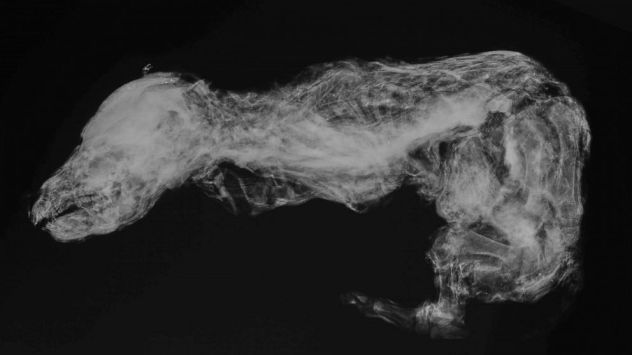 An x-ray view of Zhùr, a “perfectly preserved” wolf cub found in the Yukon Territory of Canada. (Government of Yukon)

Her genomes also revealed she was an arctic wolf — the same species as today’s gray wolves, but not a direct ancestor. The study noted Zhùr provides evidence of at least one instance of a wave of wolves crossing the Bering Land Bridge from Eurasia and replacing a previous wave.

According to Mat Wooller, director of the Alaska Stable Isotope Facility at the University of Alaska Fairbanks, the time period of Zhùr’s life lines up with an interglacial period, which is a mild period in an ice age when temperatures would have been warm enough to allow for flowing rivers and streams.

This led to another surprise to the team — the wolf’s diet, at least around the time of death, was mostly from aquatic resources, like salmon.

“This relatively high proportion of aquatic resources may come as a surprise to many who envision wolves feeding on large megafauna like caribou and bison,” Research Assistant Professor at the Water and Environmental Research Center of the University of Alaska Fairbanks Benjamin Barst said. “However, we know that modern wolves will make use of aquatic resources like salmon when they have access to those resources.” 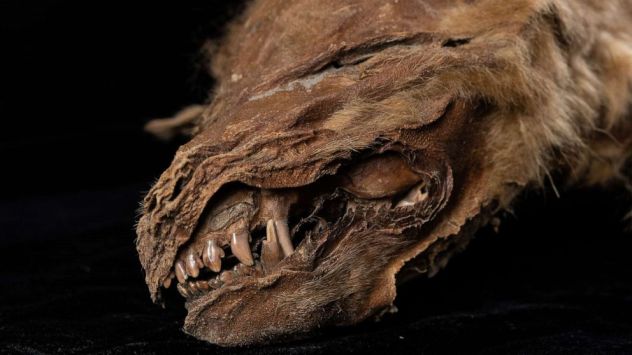 A close-up image of Zhùr, a Pleistocene gray wolf puppy. (Government of Yukon)

However, before his team could begin its work, Zhùr was returned to Dawson City for a blessing ceremony where she was named by the Tr’ondëk Hwëch’in First Nation in Yukon, whose traditional territory the wolf had been found on.

She added that the First Nation worked with scientists to ensure Zhùr wouldn’t be treated merely as a specimen.

“That side is quite important to us. There is a connection to it. We don’t want it to be just handled in the view of ‘it’s just an artifact,'” Nagano said. “We really want it to be able to have the respect behind it also. Not in the way it’s respected physically, it also need[s] to be respected spiritually.”

Nagano added that Zhùr had also helped develop better relations between the Tr’ondëk Hwëch’in and scientists as well as with the government and mining community.

“This wolf pup is bringing us together in a good way, that we can all learn from it,” Nagano said. “That part is a good way to be thankful for this wolf pup.”