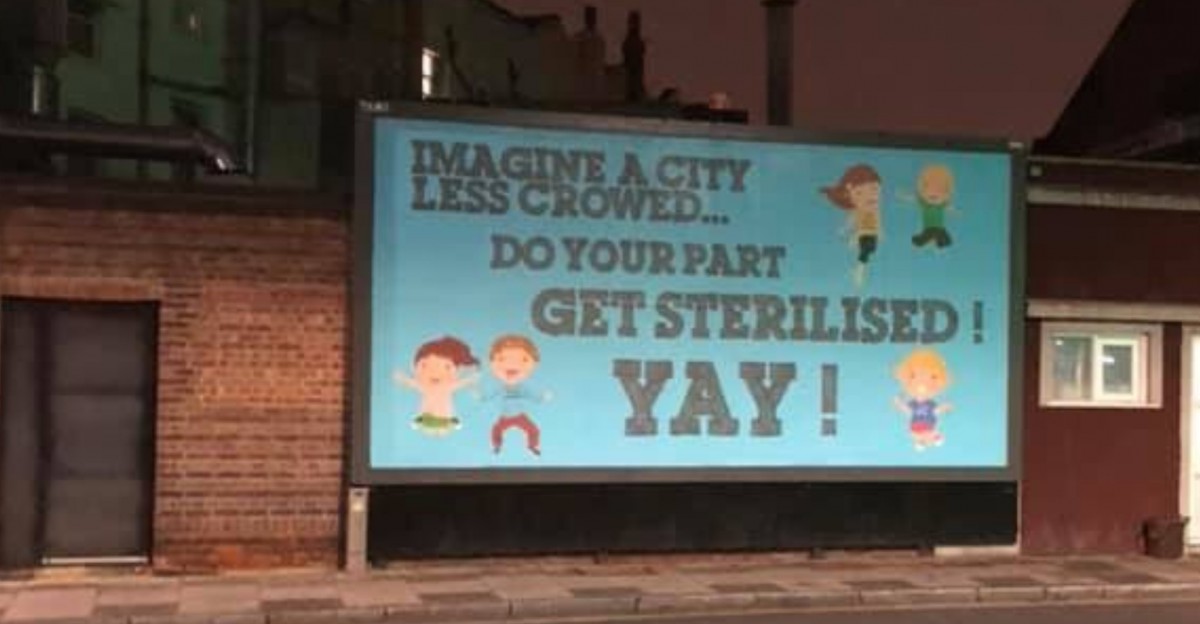 Posted on a London street, the pretty robin’s egg blue billboard with children drawn as cute cartoons – all apparently Caucasian in complexion – jumping for joy proclaims in bold capital letters:

The shirt on the little girl at the top of the large rectangular sign says:

The shirt on the toddler-aged girl below reads:

At a time when hoards of unmanageable immigrants, some of them violent criminals who have spawned a crime spree Europe hasn’t seen in modern times, have displaced native Brits, declaring war on their hosts, this new sign, spotted in Holloway Road, is creating quite an uproar among the white residents.

The Great Decrease is a movement whose mission is reduced global population:

“We have become numerous. Our species has more than doubled in the last 50 years. Today more than 7.6 billion people are living on Earth and the United Nations predicts that by 2050 over 10 billion humans will populate the Earth.

“The large number of people is the driving force behind today’s major problems, including climate change, loss of biodiversity and scarcity of resources.”

One of the catchy counter-intuitive slogans promoting the Great Increase is:

In London, the last census revealed that “white English” people comprise less than half the population – 41 percent. Observers are trying to connect the dots:

“The absence of ethnic diversity portrayed by the kids on the billboard is odd. Normally, every form of marketing or propaganda visible in the United Kingdom conforms to the “diversity standard” of socio-economic inclusion.”

The UK’s Advertising Standards Authority (ASA) aims to wipe out racial stereotyping and reflect the country’s diversity and cautions advertisers to avoid and exclude depicting racial stereotypes in their advertising.

Another critic of the peculiar billboards wrote:

“In a city with a high non-White population, all of the children depicted on the pro-sterilization billboard are White — a clear indication of the intent of whoever is paying for this chilling, offensive, and disgusting anti-White monstrosity.”

Birth rates in western Europe are currently at record lows as men voluntarily get vasectomies.

Concerned citizens around the world have noticed that the United Nations and related organizations have targeted white westerners with guilt-tripping propaganda that blames all societal woes on the developed nations while sending floods of impoverished third-world immigrants to the same countries to enjoy a higher living standard.

As a consequence of Europe’s open borders policy, the quality of life is suffering. The solution, according to the globalists who invited the migrant invasion, is for white people to adopt some of the cultural habits of the newcomers such as eating insects, foregoing meat, adopting a vegetarian diet, and having fewer children.

This trend is not being lost on awakened observers such as political and social commentator Lionel Du Cane who wrote A Matter of Time: How Time Preferences Make or Break Civilization:

“No ‘westernized’ European country has a birth rate above replacement level, yet these countries are prompted to accept increasing flows of mass immigration from Africa and Asia under the guise of economic productivity.”

Antonio Zazueta tweeted his opinion about the Muslification of England:

“White couples in Europe are having an average of 1.1 children. Because of this, by the year 2050 Europe is going to be a predominantly Muslim region – they have an average of 5 children. Not happy with these numbers they still want to cut the number of White Europeans. Very sad.”

In Europe, that unstated origin is Africa. The majority of Africans are Muslim. Muslim theology and culture preach and practice death to the infidel. The rest is history unfolding before us.