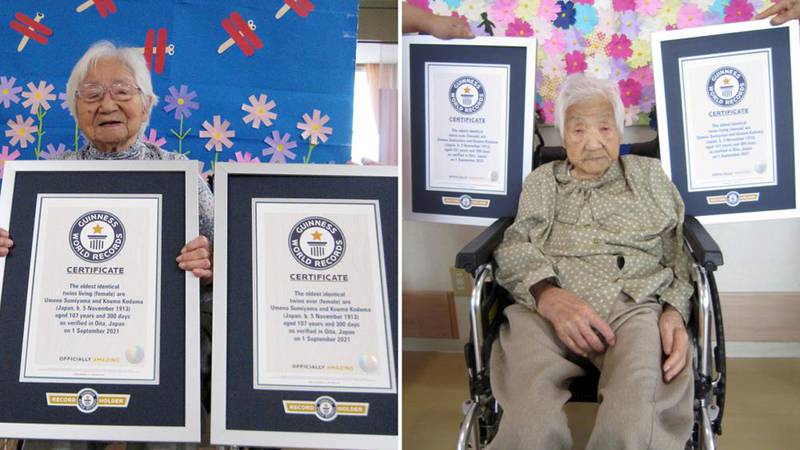 At 107, a pair of twins in Japan has been declared the world’s oldest twins!

The Yakima Herald is reporting that the Guinness Book of World Records has certified two Japanese sisters as the world’s oldest living identical twins at 107. The declaration was made coinciding with Respect for the Aged Day, a national holiday in Japan.

Umeno Sumiyama and Koume Kodama were born the third and fourth of 11 siblings on Shodoshima island in western Japan on November 5, 1913.

They were separated after elementary school when Kodama was sent to work as a maid in Oita on Japan’s southern main island of Kyushu. She later married there, while Sumiyama remained on the island where they grew up and had her own family.

The sisters later recalled their difficult younger days. Growing up, they said they were bullied because of prejudice against children of multiple births in Japan.

Busy with their own lives for decades, the sisters rarely met until they turned 70 when they started making pilgrimages together to some of the 88 Shikoku temples and enjoyed being reconnected.

Sumiyama and Kodama were 107 years and 300 days old as of September 1, breaking the previous record set by famous Japanese sisters Kin Narita and Gin Kanie at 107 years and 175 days, Guinness World Records Ltd. said in a statement.

As they were advancing in age, the pair had joked about breaking the record for the oldest living identical twins, previously held by fellow Japanese nationals Kin and Gin, but never expected to do so.

Guinness World Records said that, on their 99th birthday, Sumiyama looked at a photo of the then-record holders and said, “I think we look younger.”

Guinness World Records sent the twins their certificates by mail due to Covid-19.

The sisters live with full-time home care. Their caregivers said Sumiyama burst into tears when she saw the certificate.

“Koume, whose memory is not what it once was, sadly couldn’t fully comprehend the significance of receiving the certificate,” continues the statement from the sister home care staff.

The oldest male identical twins ever verified by Guinness World Records were Dale and Glen Moyer, from the US, who both reached the age of 105. Born in 1895, they became the oldest living twins on January 23, 2000.

Japan is known for its supercentenarians — a person who is 110 years old or older — and many records have been achieved in the country, said Guinness World Records.

Among their number is the oldest person living, Kane Tanaka, who is 118. Tanaka has twice survived cancer, lived through two global pandemics, and loves fizzy drinks.