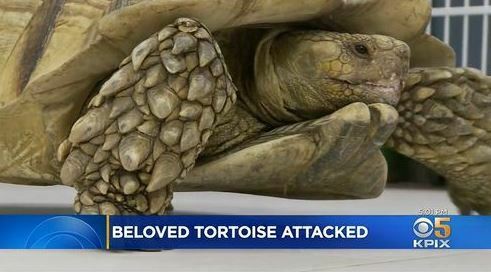 A homeless man in San Jose, California was arrested over the weekend for destruction of property and stabbing a pet tortoise at a preschool.

At around 11:30 am, San Jose police responded to the Play ‘n’ Learn preschool at 505 Massar Ave following a report of a man destroying property. Officers spotted a suspect fleeing the scene. They arrested him without incident.

Upon further investigation, police found $1,800 in damage to the school building and playground. They also found a 65-pound tortoise named Michelangelo that was stabbed through its outer shell with a piece of wood.

Police identified the suspect as 40-year-old George Robles. He is being charged with felony vandalism and animal abuse.

Robles was placed on a 72-hour emergency mental health evaluation.

“Abuse of an innocent animal is intolerable and must be addressed,” said Dave Tindall, acting police chief. “This underscores the need for continued collaboration with our mental health professionals. I am thankful for our officers’ crisis intervention training which resulted in a safe arrest for all those involved.”

The tortoise underwent an overnight surgery at Archvet Animal Hospital in San Jose. He appears to be doing well.

However, any loud, sudden noises would cause him to pull back into his shell.

“This is a brutal attack on something that can’t defend himself,” said Dr. Tal Solomon of Archvet Animal Hospital. “He can’t even run away. I’ve been doing this for almost 11 years now and this is a first for me.”

“The kids love him,” said preschool teacher Brooke Lariz. “They get so excited … He loves to be around the kids, he’s just a happy little tortoise,” Lariz said but then quickly corrected herself. The tortoise is not so “little”; he is 70 pounds.

“I thought he was dead when I saw this in there. So it was almost a good feeling when he hissed at me because I knew he was alive,” said Tammy Lariz, the preschool administrator.

“Whenever he would move or we would try to move him, more blood would come,” Lariz said.

It appeared the attacker beat the tortoise with garden tools and objects taken from a classroom.

“It just made no sense. I can’t even comprehend how you could be that disgusting to do that to an animal,” Brooke Lariz said.

Dr. Solomon said Michelangelo should make a full recovery and be able to go back to the kids. The challenge now is how to explain and help the preschoolers cope with the attack.