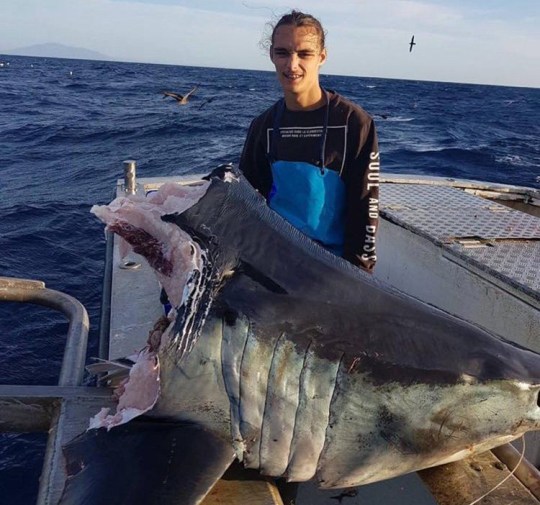 In the depths of the seas, few creatures are more badass than the blacknose shark. Yet something much meaner and much bigger, recently bit the head off of one, off the coast of Australia.

The local news reported that a resident of the Australian state of New South Wales, was amazed when he pulled out of the water the head of a huge blacknose shark.

Jason Moys is a commercial fisherman from the city of Bermaghi. He and his colleagues who discovered the severed head, weighed their discovery and determined that its weight exceeds 220 pounds. This means that in general, the shark weighed more than 660 pounds, and its length reached over 13 feet. So what in the hell could have bitten the head off such a formidable fish?

Moys took a picture of his friend Jasper Lei, along with a piece of the fish, and put the photo on Facebook, where it quickly became viral, collecting millions of views and thousands of comments.

Internet users began to build various guesses about what deep-sea monsters could have so easily coped with the giant shark. Blacknose sharks are very aggressive predators, so the opponent of such a fish would have to have been even more ferocious – and of course, much bigger.

Many users have suggested that it was a real Megalodon. These colossal sharks that existed millions of years ago are considered extinct, but some cryptozoologists believe that somewhere in the depths of the oceans such prehistoric predators still exhist.

The weight of adult Megalodons reached 80 000 pounds, and a length of 52 feet. Thus, in theory, these fish can hunt not only sharks, but also whales. A 13 foot blacknose would be a mere appetizer to a Megalodon.

However, there are those who suggest that the fish could have simply been torn up by the propeller of a large ocean going vessel. But most Australians reject this theory since traces of huge teeth are visible on the head of the predator.

Some bigger nasty predator took a large bite out of this shark – the question remains, just what could it have been?

What do you think could have killed this shark? Please comment using the comments below!