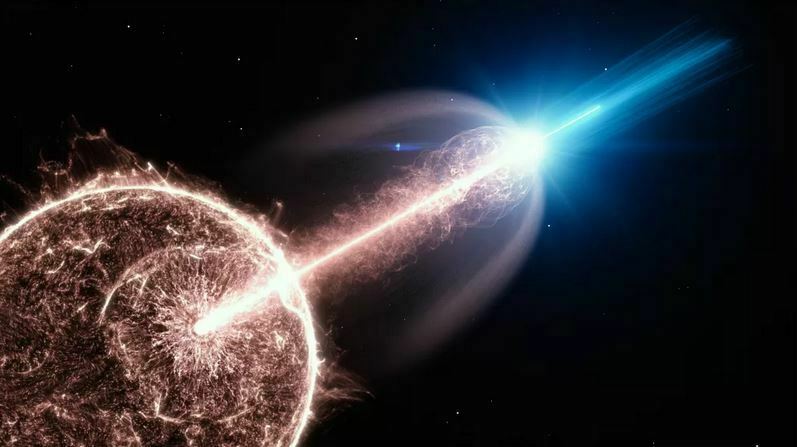 A team of scientists has gotten their best look yet at a gamma-ray burst, the most intense type of explosion in the universe.

Scientists believe some of these explosions occur when a massive star — five or 10 times the mass of our sun — explodes and abruptly becomes a black hole. Gamma-ray bursts may also occur when two superdense stellar corpses, called neutron stars, collide. This often forms a black hole as well.

In 2019, one of these gamma-ray bursts occurred only about 1 billion light-years away from Earth, which is relatively close for such an event. Scientists were able to observe the explosion for a few nights.

“We were really sitting in the front row when this gamma-ray burst happened,” Andrew Taylor, a physicist at the Deutsches Elektronen-Synchrotron (German Electron Synchrotron, or DESY) and co-author on the new paper, said in a statement. “We could observe the afterglow for several days and to unprecedented gamma-ray energies.”

Two NASA space-based observatories, Fermi and Swift, first detected the event, which is called GRB 190829A because it was detected on Aug. 29, 2019. The fireworks came from the direction of the constellation Eridanus, a large swath of sky in the Southern Hemisphere.

When the scientists behind the new research heard about the gamma-ray burst detection, they mobilized a set of five gamma-ray telescopes in Namibia, called the High Energy Stereoscopic System (HESS). Over three nights, the telescopes observed the explosion for a total of 13 hours.

From these observations, scientists could analyze much higher-energy photons than what they can with more distant gamma-ray bursts.

“This is what’s so exceptional about this gamma-ray burst,” Edna Ruiz-Velasco, an astrophysicist at the Max Planck Institute for Nuclear Physics in Heidelberg and co-author on the new research, said in the same statement. “It happened in our cosmic backyard, where the very-high-energy photons were not absorbed in collisions with background light on their way to Earth, as happens over larger distances in the cosmos.”

During those analyses, the team noticed that the patterns of X-rays and very high-energy gamma-rays matched — something scientists wouldn’t expect, since they believe different phenomena cause the two different types of radiation.

But so far, scientists have only observed four of these bright explosions from the surface of Earth, so they’re hoping that new instruments and additional observations give them more insight into the details of gamma-ray bursts.

The research is detailed in a paper that was published June 3 in the journal Science.