Rand Paul Sends Warning: ‘Be Afraid Of Your Government’ 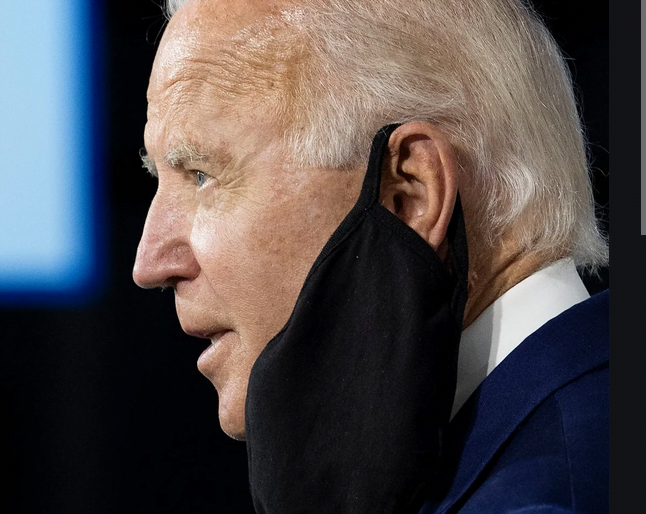 Biden Reaches Out To Republicans – Will It Work?

As vice president, Joe Biden was among those repeatedly pushing President Barack Obama to negotiate with Republicans on everything from health care to fiscal crises — even if it led to delays, watered-down policies or nothing at all.

But these days, Biden and his team, many of whom worked in the Obama administration, are taking a different approach: Talking to Republicans, yes, but doing so with more skepticism and firmer deadlines, according to six current and former Biden advisers and lawmakers.

“The lesson that this team learned, beginning with President Biden, from that experience is that there is a cost to waiting too long,” said Jay Carney, who worked for Biden before becoming Obama White House press secretary, and is now an executive at Amazon. “I think everyone is much more realistic about whether bipartisan cooperation is possible.”

Biden, the aides and lawmakers say, believes action is more important than bipartisanship, and is convinced Americans will support him in his efforts. He recognizes that his window for this approach may close by the midterm elections. That’s why, the aides and lawmakers say, he may be willing to give up the reputation,cultivated over decades, as a dealmaking lawmaker if he can be a transformative president who pushes through a once-in-a-generation investment in infrastructure and social programs.

The president will talk with Republicans about his new pair of proposed spending plans — a combined $4 trillion in spending designed to ignite economic recovery following the coronavirus pandemic — but he is prepared to back a congressional maneuver that would allow Senate Democrats to pass legislation without GOP support, perhaps within weeks, aides and lawmakers familiar with his thinking say. ‘America is rising anew’: Biden lays out ambitious, expensive plan to emerge from pandemichttps://imasdk.googleapis.com/js/core/bridge3.453.0_en.html#goog_1051400728

“There are certainly some in the president’s inner circle who were part of the Obama team who say, ‘Look, we can’t just have this go on forever,’” said Sen. Chris Coons (D-Del.), a longtime Biden friend who has occasionally encouraged Biden to take a bipartisan approach. “There has to be an outcome.”

Biden is expected to host lawmakers from both parties at the White House this week. He’s also invited House and Senate leaders over the following week, which comes after House Republican Leader Kevin McCarthy complained that hadn’t met with Biden since the election. Biden is also calling individual lawmakers, including West Virginia Sen. Shelley Moore Capito, the top Republican of the Senate Environment and Public Works Committee, to discuss the parameters of an infrastructure bill.

White House aides say they expect to take more time on the new spending plans, which they consider different than the emergency Covid legislation.

“Reaching across the aisle and seeking to bring the American people together have always been at the core of who the president is,” White House spokesperson Andrew Bates said. “He’s deeply proud of the genuine engagement with Republicans in Congress that President Obama and he carried out for eight years, just as he is of the similar, good faith work he’s doing with Republicans now.”

But Biden aides also are hinting that there are time limits to how long that engagement will last. They say the president hopes to make progress on both spending bills — either as a pair or individually — by Memorial Day and sign them into law this summer. And the calendar creates some urgency: By the end of his first year, members of Congress will be consumed by the midterms and then the next presidential race. The White House also knows how a drag-on legislative process can consume a presidency and party.

“Biden and the people around him understand you have to get as much done this year as possible,” said Republican Chuck Hagel, who served with Biden in the Senate and later served as Defense secretary in the Obama administration. “At what point then — if you’re not making any progress on any front and you’ve been willing to compromise on some things — do you have to go it alone. That’s a decision they’re going to have to make. You don’t have a lot of time.”

There are common threads that tie the Biden team to the Obama years and remind them of the attempts at bipartisanship that went unrealized. Chief among them are the staff. Biden has filled the White House with former Obama aides, including chief of staff Ron Klain; Brian Deese, director of the National Economic Council; Susan Rice, director of the Domestic Policy Council; and Cecilia Rouse, chair of the Council of Economic Advisers.

But there are differences, as well. Whereas Obama spent much of his first term fighting bad economic news and pushing a health care reform effort that grew more and more unpopular, the current White House feels emboldened by Americans’ support for Biden’s proposals, including the popularity of the $1.8 trillion American Rescue Plan, the coronavirus recovery bill passed six weeks ago with no Republican votes. And that includes the backing of Republican governors, mayors and local officials across the country.

“What’s more important now during a crisis is they want things done,” Biden’s lead pollster, John Anzalone, said. “If that means Joe Biden has to go it alone, they seem to be fine with that.”

Democratic activists also have what they considered to be scar tissue from the Obama years. Theyare pushing Biden to act without Republicans on a host of other issues — including police reform, immigration, and firearms restrictions — because they say the GOP can’t be trusted to negotiate. Many are arguing Democrats should revamp the Senate rules to allow legislation to pass by a simple majority vote. They say Republicans only grew more obstinate during the Trump era, making the party even more difficult to negotiate with.

“Everybody talks about, can I do anything bipartisan?” Biden said at a meeting last week with TV anchors at the White House. “Well, I got to figure out if there’s a party to deal with. We need a Republican Party. … We need another party, whatever you call it, that’s unified — not completely splintered and fearful of one another.”

Recent polls give Biden a net job approval rating with relatively high marks from both Democrats and independents, but he’s yet to garner much support from Republicans. Only 14 percent of Republicans gave Biden an “A” or “B” grade for his first 100 days in office, according to a recent poll conducted by POLITICO and Morning Consult. Eighty-five percent of Democrats and 44 percent of independents gave Biden the same marks. Biden highlights 100 days and Jobs Plan in Georgia, in 180 secondshttps://imasdk.googleapis.com/js/core/bridge3.453.0_en.html#goog_1502415952

Some Republicans say Biden, just like Obama, may be willing to talk but is not necessarily committed to making major concessions. “It has surprised me how unabashedly partisan he has been from Day One,” said Joe Grogan, who worked in the Trump and George W. Bush administrations. “It’s not the way he campaigned. It’s not the way he served in the Senate. They said he would reach across the aisle. It was a key talking point.”

Sen. Susan Collins (R-Maine), perhaps the most moderate Republican in the Senate, said on Sunday that she is “disappointed” with Biden’s efforts at crafting a bipartisan deal around Covid relief and viewed the infrastructure package as a major “test on whether President Biden is truly interested in bipartisanship.”

“The Joe Biden that I knew in the Senate was always interested in negotiation. I thought very highly of him,” Collins said. “I like him. I worked with him.”

Across more than three decades in the Senate, Biden was known as a dealmaker who wasn’t afraid to negotiate and maintain friendships with both parties. When he was vice president, Biden served as Obama’s chief liaison with the Congress and was one of the people who urged Obama to talk to Republicans.

“Joe Biden himself was one of the people encouraging Obama to be that kind of bipartisan negotiator because he was such a believer in the Senate as an institution,” said a former Biden aide who is in touch with the White House. “Biden was a very loud voice in an Obama Oval Office saying, ‘No, we can get the Republicans, I believe in it.’”

Biden was dispatched to the Senate to try to cut deals with Minority Leader Mitch McConnell on tax cuts and spending levels, only to anger then-Majority Leader Harry Reid and other Democrats. At the time, Democrats complained that Biden undermined their leverage, and signed off on deals that over-extended the Bush tax cuts and ignored the need for economic stimulus. They point to the delayed passage of the Affordable Care Act as proof that the party was foolish in expecting GOP support for major measures.

“We need only go back to the summer of 2009 to see how Republicans played Democrats for months with no intention of ever supporting a bill to deliver health care reform to millions,” said Zac Petkanas, senior adviser to Invest in America Action, a group supporting public investment.

But Phil Schiliro, who served as director of legislative affairs at the start of Obama’s term, argued Obama — aided by Biden — was successful in winning Republican support for a host of issues, including equal pay legislation, children’s health insurance and $350 billion more in bailout funds, in 2009 and 2010, when Democrats controlled both chambers of Congress, as they do now. The Obama administration still had to work with both the GOP and a host of conservative Democrats who pushed them to negotiate further in some cases.

“It seems to me they’re taking the same approach,” Schilliro said. “They’d like to get bipartisanship if they can, but if they can’t, they don’t want to keep from doing what’s in the best interest of the country.”

In his first speech to Congress last week, Biden outlined a laundry list of Democratic priorities — from $4 trillion in new federal spending over the next decade to roads and bridges, child care and prekindergarten, calls for police reform, racial justice, gun restrictions and, as he put it, ending “our exhausting war over immigration.”

“I’d like to meet with those who have ideas that are different — they think are better. I welcome those ideas,” he said. But he added, “I just want to be clear: From my perspective, doing nothing is not an option.”Biden’s first Joint Congress Address, in 180 secondshttps://imasdk.googleapis.com/js/core/bridge3.453.0_en.html#goog_1574897069

Biden’s speech included only a few nods to bipartisanship, though he did praise Republicans for releasing their own counteroffer to his $2.3 trillion infrastructure plan. Republicans, who have expressed concerns about the hefty price tag, proposed tax hikes and new programs and introduced a slimmer $568 billion proposal that focused most funding on more traditional elements of infrastructure, including bridges, highways and roads.

After Biden’s speech last week, Capito said Republicans had been left out. But after he called her, she tweeted that they “had a constructive & substantive call.”

Biden, however, made clear to reporters the day after his address to Congress that a small Republican package would not be enough. “If like last time they come in with one-fourth or one-fifth of what I’m asking and say that’s our final offer … then no, no go,” he said.

27 thoughts on “Biden Reaches Out To Republicans – Will It Work?”