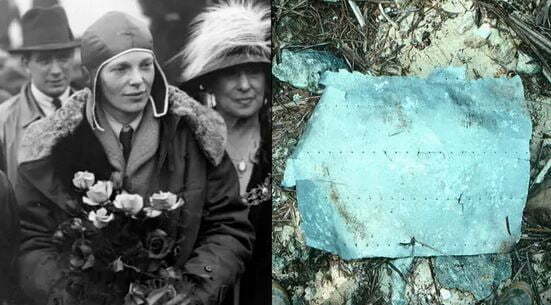 Are Nuclear Scientists About to Solve the Mystery of Amelia Earhart?

Almost 84 years after Amelia Earhart’s plane went missing somewhere over the central Pacific Ocean near Howland Island, nuclear scientists believe they are about to solve the mystery once and for all.

Earhart was the first female pilot to fly solo across the Atlantic Ocean in 1928, a time when aviation was still relatively new. She also wrote many books about her experiences, becoming a celebrity in the United States.

However, she is now mostly remembered for her mysterious disappearance and assumed death in 1937. She was last seen with with her navigator Fred Noonan in Lae, New Guinea, on July 2, 1937. They were on the last land stop before Howland Island and one of their final legs of an attempt to circumnavigate a flight around the world.

Using neutrons to probe wreckage from the remote island of Nikumaroro, a coral atoll in the Western Pacific OCean, nuclear scientists think they can solve the mystery.

A piece of fuselage was recovered from the island in 1991. It is speculated that Earhart landed there in 1937. However, the piece was damaged by decades of rolling around on the ocean floor, and researchers never had a way to confirm if it was from the aviator’s plane.

Nuclear scientist at Pennsylvania State University, Daniel Beck, will have the wreckage analyzed by the Radiation Science & Engineering Center.

Richard Gillespie of The International Group for Historic Aircraft Recovery, who had found the wreckage initially, said “The size of the artifact matches a patch that was installed on the Earhart aircraft when she was in Miami, Florida, in late May 1937 at the start of her second world flight attempt.”

“The artefact was removed from an aircraft by a combination of stress and human action,” he continued.

Gillepsie explained how they will analyze the wreckage: “Two processes will be used to probe the piece of fuselage. One will be neutron radiography, whereby the wreckage is placed between a neutron beam and an imaging plate, creating a sort nuclear x-ray.”

This will give an impression of the wreckage and may reveal clues hidden to the naked eye due to decades of erosion, such as a serial number or trace amounts of paint.

Gillespie explained that the other process will be Neutron Activation Analysis (NAA), which will reveal the material makeup of the artifact with parts-per-billion sensitivity thanks to a process that will release specific energy gamma rays, and he’s confident that the artefact will be the real deal.

“All of its physical properties – the type of aluminum, the thickness of the sheet, the type and size of the one surviving rivet, are correct for Earhart’s aircraft”, he said.

TIGHAR has also recovered a photo taken of Nikumaroro three months after Earhart’s plane disappeared, which appears to show an unidentified object in the water, while various other artifacts have been recovered from the island too, including a pocket knife matching the one in Earhart’s inventory and glassware matching a type used for women’s cosmetics in the 1930s.

Ultimately, the findings could reveal if the fuselage really did come from Earhart’s doomed aircraft, and Beck said: “There are many theories out there awaiting the final clue to confirm her final location.

“We look forward to using science to provide additional information to help the mystery come closer to being solved.”

432 thoughts on “Are Nuclear Scientists About to Solve the Mystery of Amelia Earhart?”